The strength of America’s economy in the 1920’s came to a sudden end in October 1929 – even if the signs of problems had existed before the Wall Street Crash. Suddenly the ‘glamour’ of the Jazz Age and gangsters disappeared and America was faced with a major crisis that was to impact countries as far away as Weimar Germany – a nation that had built up her economy on American loans. 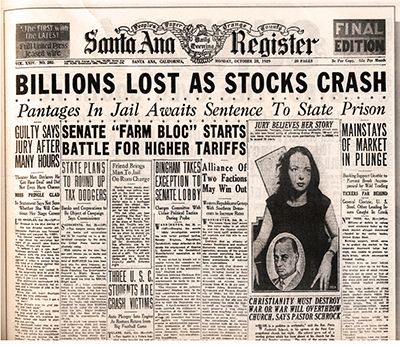 The huge wealth that appeared to exist in America in the 1920’s was at least partly an illusion.

For example the African Americans and the farmers had not benefited in the Jazz Age but neither had 60% of the whole population as it is estimated that a family needed a basic minimum of $2,000 a year to live (about £440) and 60% of US families earned less than this. Almost certainly some of the 60% included those who had gambled some money on Wall Street and could least afford to lose it in the crash of October ‘29.

The very rich lost money on Wall Street but they could just about afford it. But the vast bulk could not afford any loss of money. This had a very important economic impact as these people could no longer afford to spend money and therefore did not buy consumer products. Therefore as there was no buying, shops went bust and factories had no reason to employ people who were making products that were not being sold. Therefore unemployment became a major issue. The Great Depression took a while to get going but by the winter of 1932 it was at its worst.

The impact of the Wall Street Crash:

There was no system of benefit for the unemployed. Charities such as the Salvation Army gave out free food and shelter. It is known that some people actually starved to death. In some states men deliberately set fire to forests to get temporary employment as fire fighters while farmers killed their animals as no-one could afford to buy them in the cities despite there being great hunger there.

What did the government do?

The president was a Republican, Herbert Hoover. He believed that if you were in trouble you should help yourself and not expect others to help you. This he called “rugged individualism”. Therefore he did not do a great deal to help those out of work.

Hoover did not believe that the depression would last – “Prosperity is just around the corner” is what he said to businessmen in 1932 when things were just about at their worst. Squalid cardboard campsites were created in cities to live in…called “Hoovervilles”. The nick-name of the soup given out by charities for the unemployed was “Hoover stew”.

However, Hoover did do some good. Money was used to create jobs to build things such as the Hoover Dam. In 1932 he gave $300 million to the states to help the unemployed (Emergency Relief and Reconstruction Act) but it had little impact as states run by the Republicans believed in “rugged individualism” more than Hoover did and they used only $30 million of the money offered to them.

Many saw Hoover’s attempts as being “too little too late”.

In the November 1932 election, Hoover was heavily defeated by the Democrat candidate. This man had promised the American public a “New Deal“. His name was Franklin Delano Roosevelt. Thirteen years of Republican rule had come to an end.

Causes of the Great Depression

Weimar Republic and the Great Depression