The British Army had created its first commando unit in 1940 and from 1942 on, it joined with the Royal Marines. The Royal Marines had a proud history even before the outbreak of World War Two. It was during the 1939–45 war, that the Royal Marines took on a commando role, linking the regiment to the Army Commandos that already existed. 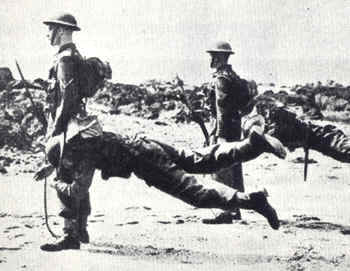 The commandos task was to land in Nazi-occupied Western Europe usually at night, destroy vital targets and leave as quickly as possible. In June 1940, Churchill had called for 20,000 men; men he called “leopards” ready to spring at the throats of the Germans. Winston Churchill had ordered the creation of a “butcher and bolt” small group raiding unit after the defeat at Dunkirk and the evacuation of the BEF from mainland Europe. Morale in the country was thought to be in need of a boost. Clearly, Britain was not in a position to launch any form of major military attack on the Germans – but a series of spectaculars would, Churchill believed, do a great deal for morale.

On June 9th, 1940, a department in the War Office was created to deal with the issues surrounding the creation of such a force. This office was to become Combined Operations as it involved all three services

Selection for the new commando force was necessarily demanding. Men had to be physically very fit. But they also had to show that they did not need the traditional chain of command to operate in the field as in the heat of battle such chains of command could break down. Initiative was considered to be a vital commodity. Some 400 men passed through the first phase of recruitment – which included training when live ammunition was being used.

Lieutenant-Colonel Dudley Clark of the Royal Artillery put forward the name ‘commando’ for the new force – after the term used in the Second Boer War. Churchill himself approved of the title while senior military figures did not; they preferred the title ‘Special Service’ and the two were used alongside one another.

To start with, each commando unit was to consist of fifty men and three officers. In 1941, this changed to sixty-five men per commando. Eventually, commandos from the Army and the Royal Marines were combined into four brigades.

Those who got through the training received extra pay and the kudos of wearing the commando badge on their uniform. At the end of training each commando was skilled in beach assaults, cliff assaults, signalling, close quarter fighting, outdoor survival and demolition. Training was done in Scotland where a special training centre was created at Lochailort. Combined Operations created an all forces amphibious centre at Inveraray in the Scottish Highlands. In 1942, a specific commando training base was established at Achnacarry Castle, also in Scotland. Training was done in Scotland for a number of reasons – the primary one being that the training centres were so remote that they attracted few observers and anyone in the vicinity of one of the training centres would quickly be recognised. Also the more severe climate in Scotland was perfect for what the commandos had to train for.

The first official commando raid was in June 1940 on the northern French coast.  Commandos were also in action in other parts of France, Norway, the Middle East and Italy. They played a significant part in D-Day and their success led to Hitler bringing in his ‘Kommadobefehl’ – the Commando Order.